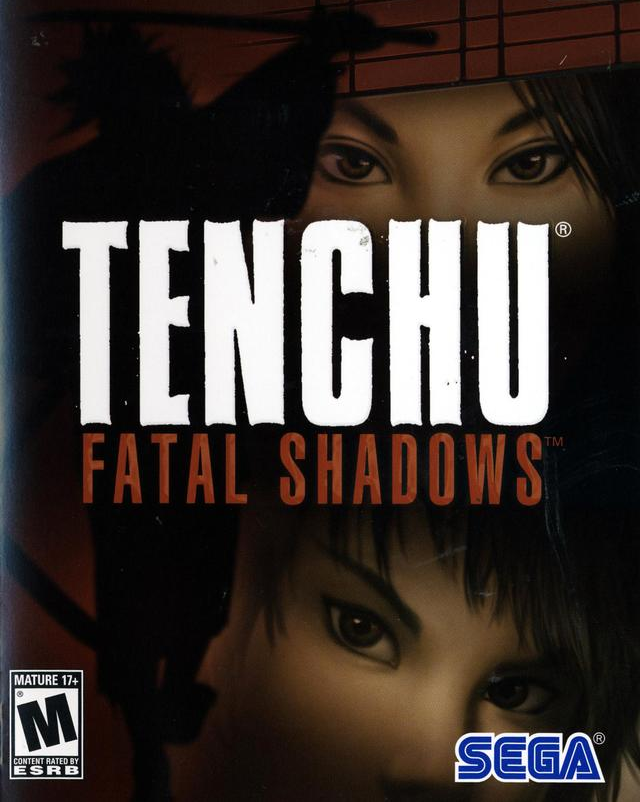 Tenchu: Fatal Shadows
PlayStation 2 2004
WP GB Mob FAQ IMDB YT img Goo StrW
completed!
Tenchu has always been a favourite of mine. Unlike so many other games, this game rewards patience, skill, and thoroughness. Tenchu III: Wrath of Heaven added RPG-elements: the ability to gather scrolls from stealth kills, yielding new abilities to your ninjas. Some of these abilities are quite uninteresting, and some literally changes the way you play the game. Each level is very open-ended and non-linear, and can be completed in infinitely many ways, and the special abilities and items of your ninjas enables some very creative solutions indeed.
That being said, Fatal Shadows is almost the worst of the Tenchu series (the horrible PSP version being the worst). However, and this is the reason I completed it, the actual gameplay of this game is as good as any of the games. It is basically the same game as Wrath of Heaven, except the ability to drag corpses around has been reintroduced, and the items and specials are a bit different.
The problem with Fatal Shadows has to do with story and characters. The story of the series usually involved completing missions for your master, dealing with corruption, and towards the end of each game, you get closer and closer to hell, killing demons and the like. Very satisfying stuff, and stuff that every Ninja Gaiden-fan should appreciate. However, the story in Fatal Shadows is bland and boring, there are no supernatural creatures at all, and revolves around the two girl ninjas, Rin and Ayame, which are poorly defined and have anachronistic dialogue. I really miss someone to identify with, Rikimaru, Tatsumaru, or Tesshu. Apart from being boring, the story actually doesn't seem to make any sense. Every movie seems to be detached from the others (apart from recurring characters), and you never figure anything out about the plot.
The AI is basically the same as in the first Tenchu game, meaning that enemies will wander in predefined routes, react deterministically to certain situations (e.g. always eat poison rice :), and when alerted, behave like as intelligently as locust, e.g. climb over houses instead of walking around them, or stand in corners and jump incessantly.
The level design is OK, but is sometimes plagued by invisible walls, which, as always, ruins the illusion of the game. The sound effects are basically the same as in the first Tenchu, and they seem too shoddy for a 2005 game. The music is quite good.
If you wonder whether to play this game, you have two choices: If you haven't played the other games in the series, play those first. Wrath of Heaven is extremely good, and has all the qualities of this game, and almost none of its flaws. If you have played and liked all the other games, you will still like this one because of the great gameplay, and the new special abilities.
Upon completion, I unlocked two new outfits - one for each ninja, 'Red Blade' mode (point attack), and japanese voice-overs, which makes the stupid dialogue seem a bit more mysterious and interesting.